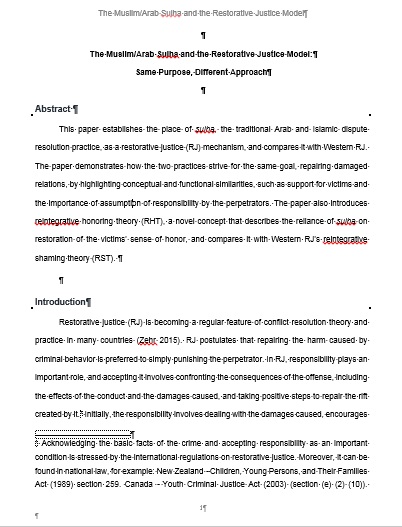 This paper establishes the place of sulha, the traditional Arab and Islamic dispute resolution practice, as a restorative justice (RJ) mechanism, and compares it with Western RJ. The paper demonstrates how the two practices strive for the same goal, repairing damaged relations, by highlighting conceptual and functional similarities, such as support for victims and the importance of assumption of responsibility by the perpetrators. The paper also introduces reintegrative honoring theory (RHT), a novel concept that describes the reliance of sulha on restoration of the victims’ sense of honor, and compares it with Western RJ’s reintegrative shaming theory (RST).


* This paper has been accepted for publication in Conflict Cardozo Journal of Conflict Resolution. Expected publication date: June 2018 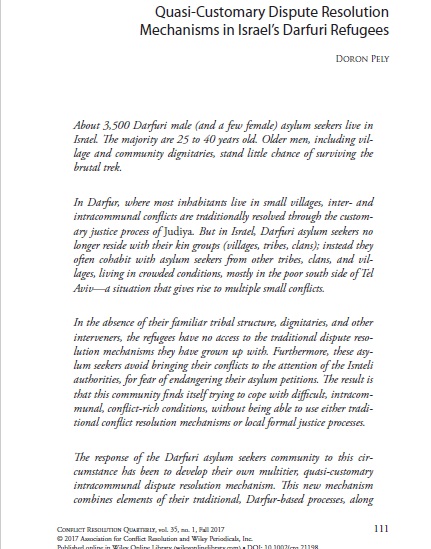 About 3,500 Darfuri men (and a few women) asylum seekers live in Israel. In Darfur, where most inhabitants live in small villages, inter and intra communal conflicts are traditionally resolved through the customary justice process of Judiya. But in Israel, Darfuri asylum seekers no longer reside with their kin-groups (villages, tribes, clans); instead they often co-habit with asylum seekers from other tribes, clans and villages, living in crowded conditions, mostly in the poor south side of Tel Aviv - a situation that gives rise to multiple small conflicts.

In the absence of their familiar tribal structure, dignitaries, and other interveners, the refugees have no access to the traditional dispute resolution mechanisms they have grown up with. The response of the Darfuri asylum seekers community to this circumstance has been to develop their own multi-tier, quasi-customary intra-communal dispute resolution mechanism. This new mechanism combines elements of their traditional, Darfur-based, processes, along with newly constructed modifications designed to compensate for the missing elements (e.g., lack of village elders), and make use of available resources (e.g., young community activists).

This paper employs analysis of multiple interviews and review of relevant literature to identify and describe the unique, informal dispute resolution mechanism that the Darfuri community developed in Israel.

Insights developed in this paper may help community activists, municipalities, policy makers, NGOs and other individuals and organizations in understanding and facilitating alternative dispute resolution mechanisms within similarly-structured, and similarly-affected displaced persons and asylum seeker communities around the world.


* This paper has been accepted for publication in Conflict Resolution Quarterly (CRQ). Expected publication date: May 2017 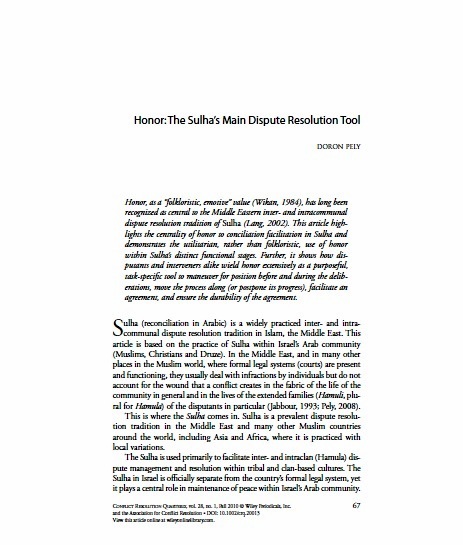 Honor, as a folkloristic, emotive”value (Wikan, 1984), has long been recognized as central to the Middle Eastern inter- and intracommunal dispute resolution tradition of Sulha (Lang, 2002). This article highlights the centrality of honor to conciliation facilitation in Sulha and demonstrates the utilitarian, rather than folkloristic, use of honor within Sulha’s distinct functional stages. Further, it shows how disputants and interveners alike wield honor extensively as a purposeful, task-specific tool to maneuver for position before and during the deliberations, move the process along (or postpone its progress), facilitate an agreement, and ensure the durability of the agreement. 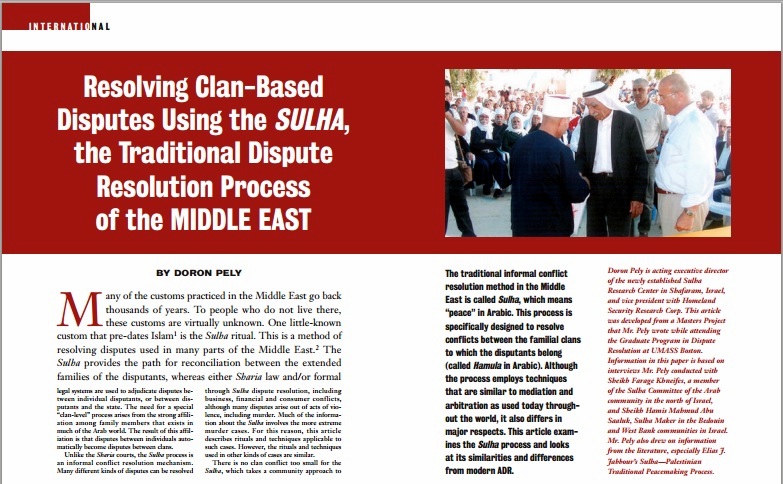 This article examines the traditional informal conflict resolution method in the Middle East, called Sulha, and offers a comparison and contrast to modern alternative dispute resolute (ADR) methods. Sulha is specifically tailored to encourage reconciliation between extended family members involved in legal disputes. It is noted that Sulha means "peace" in Arabic, and that the method is structured around a belief that to commit crime against an individual is to commit crime against a whole community. 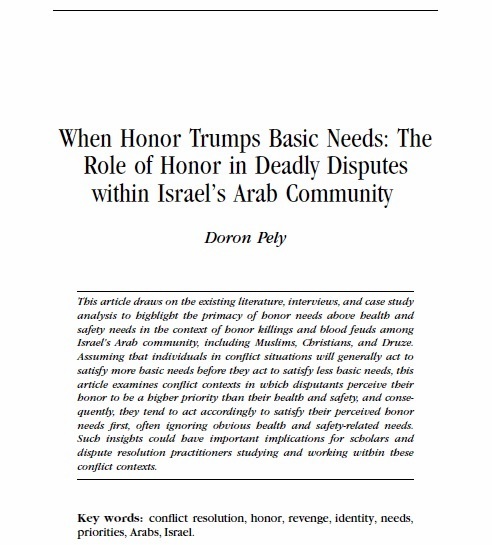 When Honor Trumps Basic Needs: The Role of Honor in Deadly Disputes Within Israel's Arab Community

This article draws on the existing literature, interviews, and case study analysis to highlight the primacy of honor needs above health and safety needs in the context of honor killings and blood feuds among Israel’s Arab community, including Muslims, Christians, and Druze.

Assuming that individuals in conflict situations will generally act to satisfy more basic needs before they act to satisfy less basic needs, this article examines conflict contexts in which disputants perceive their honor to be a higher priority than their health and safety, and consequently, they tend to act accordingly to satisfy their perceived honor needs first, often ignoring obvious health and safety-related needs.

Such insights could have important implications for scholars and dispute resolution practitioners studying and working within these conflict contexts. 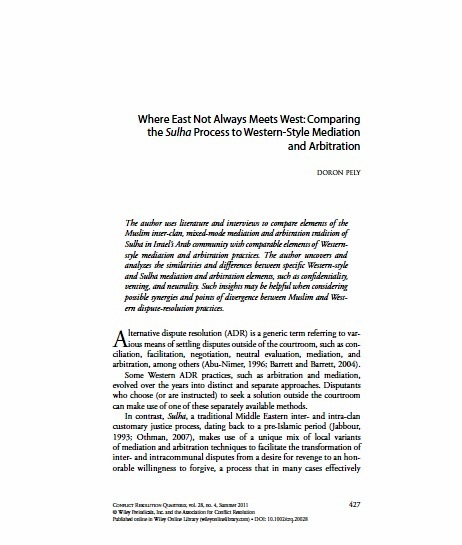 Where East Not Always Meets West: Comparing the Sulha Process to Western-Style Mediation and Arbitration 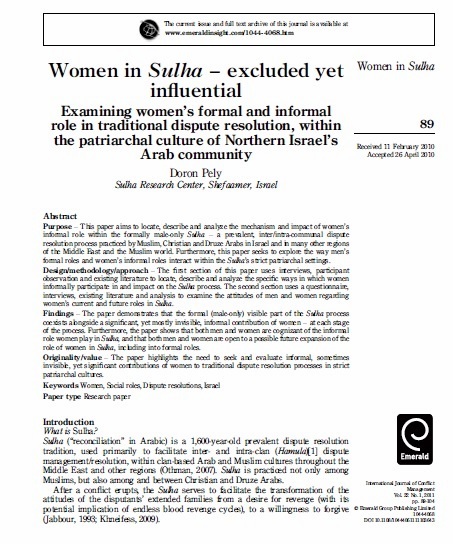 Purpose – This paper aims to locate, describe and analyze the mechanism and impact of women’s informal role within the formally male-only Sulha – a prevalent, inter/intra-communal dispute resolution process practiced by Muslim, Christian and Druze Arabs in Israel and in many other regions of the Middle East and the Muslim world. Furthermore, this paper seeks to explore the way men’s formal roles and women’s informal roles interact within the Sulha’s strict patriarchal settings.

Design/methodology/approach – The first section of this paper uses interviews, participant observation and existing literature to locate, describe and analyze the specific ways in which women informally participate in and impact on the Sulha process. The second section uses a questionnaire, interviews, existing literature and analysis to examine the attitudes of men and women regarding women’s current and future roles in Sulha.

Findings – The paper demonstrates that the formal (male-only) visible part of the Sulha process coexists alongside a significant, yet mostly invisible, informal contribution of women – at each stage of the process. Furthermore, the paper shows that both men and women are cognizant of the informal role women play in Sulha, and that both men and women are open to a possible future expansion of the role of women in Sulha, including into formal roles.

“Never memorize something that you can look up.”